Multi-media installation as part of the exhibition Grain, Wood, Flax, Turf at Voorkamer in Lier curated by Glenn Geerinck in 2014. In collaboration with Willem Badenhorst.

Structured around a keen interest in method acting and the performer’s capacity to ‘disappear’ in a role. With objects and materials found at the exhibition site - including clay, cables, bottles and glass - the pair embarked upon a series of exploratory and improvisational practice sessions in the exhibition space. A glimpse of these occasions is visible in the photographic works: the performer with empty bottles taped to his feet or with his head sticking out of a hole in the floor, while Van den Berghe directs his attention to a nearby laptop screen. In spite of the improvisational character of the sessions, the photos also indicate a process of deliberate staging.

The installation, with its scattered miscellaneous objects and areas of prior activity demarcated in masking tape, became the site for a performance during the opening of the show. The performer was relentlessly dancing to loud music on his headphones within an entirely silent space, pushed to exhaustion by the unheard directives of the soundtrack.

On the occasion of the exhibition, the publication >>Facial Studies (pdf) << was published in edition of 150. 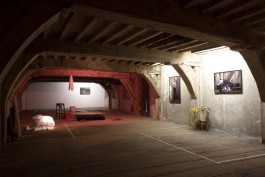 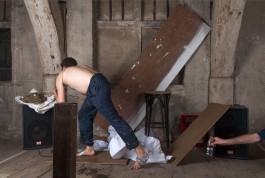 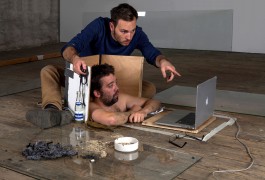 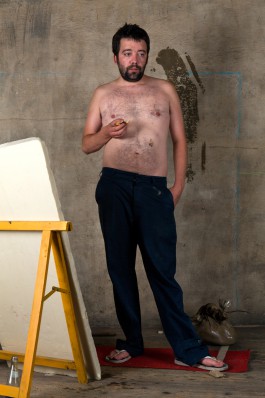 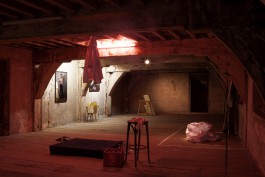 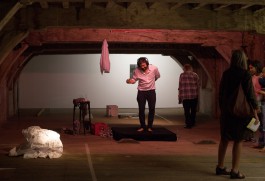 Live performance during the entire opening of the exhibition Grain, Wood, Flax, Turf