Photo-installation as part of the exhibition Rehearsal at Galleri NON, Istanbul in 2011, curated by Nazli Gürlek.

Bühnen explores the underlying ideologies in our modes of presentation and the impact of architecture on human psychology. Historical examples range from the monumental aesthetics of the Nazis, to the nearly invisible marketing strategies behind the colorful interior of a MacDonald’s restaurant. The photographs in this series show sceneries and displays varying from an auditorium after a conference to a science museum. Although these are all human constructions, humans themselves are left out of the picture. What remains, are empty spaces that have become like the backrooms of churches, in which the stored objects have lost their sacred aura.

The series was published in DWB magazine with a text by Inge Henneman. 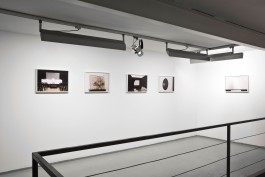 Installation view of Rehearsal at Galleri NON in Istanbul in 2011. 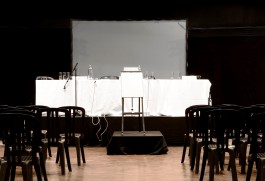 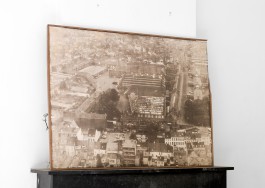 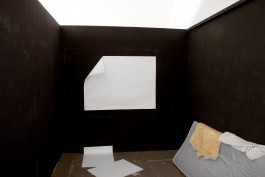 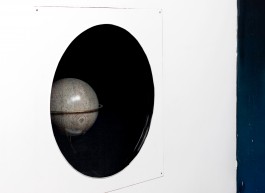 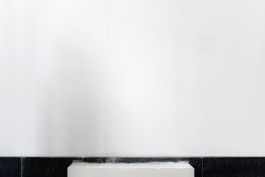 From its inception photography has, maybe even more than any other medium, been dominated by a modernistic quest for what is left of what is real. The seemingly direct contact with what is called ‘reality’ and the almost humble, documentary character of the photographic image result in the fact that a contemporary photographer has to arm himself against that mainly essentialistic tradition.

That dismantling function of the photographic image and the quest for reality make up the leitmotiv in the photographs and videos that Ben Van den Berghe has made in the past years. However, the artist reverses the above-mentioned modernistic movement from the image to its ultimate meaning, and shows that images are really representations; they create and manipulate meaning. At first sight the photographs refer to documentary photography. He always shows scenes which lead the spectator to suspect that the photographer wants to capture something of their true nature in the image. The objects he shows are yet not charged with a transcendental meaning, which at the same time is unrelated to man and can be discovered by him. Quite the contrary; in this series of photographs, the subject is always the meaning that man itself attributes to reality.

That expresses itself in the fact that the artist exclusively photographs human constructions, scenes that do not seem to reveal the truth but a secret ideology, a structured representation of a state of affairs of which the underlying structure is disguised. The images manifest first and foremost the urge that man has for classification, the need for a clear story. In other words, the image is shown as a means to simplify the endless process of meaning. Moreover he shows how much we are surrounded by subtle indicators that should give us the feeling that we live in a well-organized world: ‘everything’s alright’ says one of the photographs. They can involve very direct manipulations or fictions which are therefore easy to dismantle, but by extension also cognitive or psychological fictions that man uses to shape reality.

Nevertheless, photography does not offer the artist an alternative truth and also does not serve to remove the mask of fiction, to thus expose reality’s true colours. By showing objects in a different context, on photographs that expressly make it clear that they are constructions also, the photographer strips them of their iconic, mythologizing function. The fact that in addition, for example, an image of an image is shown (like an old aerial photo of the Higher Institute for Fine Arts) causes the image of the original context to lose its logical meaning. Furthermore, the photographs call for attention to their composition. On a photograph, which as an autonomous image is in principle unrelated to the story behind it, the display obtains an undefined aspect; it becomes an element in a photographic unit that does not just contain one myth but an endless arsenal of stories.

The images do not expose a uniform truth, but on the contrary add meaning through the photographic gesture. On one level they unmask manipulation and fiction and on the other level they are also a fiction themselves, but one that does not want to gives us something to go by. A reality overloaded with expressive images, in enlarged form obviously leads to paranoia about its hidden agenda. On the other hand, you can put the controlled paranoia of a photography that makes you doubt the true nature of an image, and that re-establishes the fundamentally unstable meaning of reality.